A new threat: the black weevil

The red palm weevil has become a threat to the survival of our palms and  also the black snout weevil became a serious pest for other species of plants.

In 2012 the black  snout weevil was detected for the first time in Jávea in agaves, today it has expanded and is attacking other species of high ornamental value.

The black beetle (Scyphophorus acupunctatus) is a beetle that comes from America, specifically from Mexico. It is characterized by its black color and having a long snout. It is a little smaller than the red palm weevil, but it can still reach 2.5 cm long. It has no wings, although it is able to travel great distances.

The black snout weevil can be found in the plants from the root and its leaves or stems lower, where   the females deposit her eggs. The larvae  feed on the plant  causing damage and  the affected plant will be killed, also due to the induced  bacteria.

Against this pest there is no choice but to act.

We recommend to our clients and to all those who have specimens of plants threatened, or that have a special affection, that they decide to treat them against this pest. 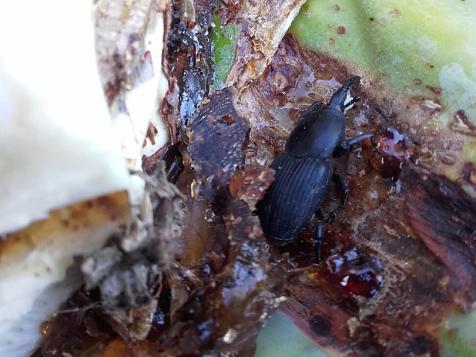 The Palm trees. Most common pests

Palm trees, like other plants, can suffer from problems that affect them, sometimes to death. The point of a growth point of the palm is the "bud": the point where there are young and young leaves. If this part is affected the plant can weaken and die. The main problems between generals can be distinguished in:

There are different species of the Curculionidae family of Asian or South American origin that are affecting our countries by the unauthorized importation of non-indigenous species (which is disciplined by Law and that need a phytosanitary passport and a time of observation in nurseries before of the sale).

When visible damage (twisting of the outermost leafs on the central nerve that changes color, leafs falling) is very late and the plant is often compromised and dies at once.

The larvae with powerful jaws dig galleries in the trunk up to meters looking for food to develop, for this reason the plant dies. When the weevil has no food or is adult, look for other palm trees to start a new attack. The life cycle is 3-4 months.

The treatment of Preventive Fumigation repeated during the year result in a good control of the red palm weevil.